Many materials have free electrons. These electrons are not bound tightly to the atoms. They are free to move from one atom to another. When large numbers of these electrons move in one direction, the result is called an electric current.

Materials known as electrical insulators have few free electrons. It is difficult to force any of the electrons to move from atom to atom. Therefore, it is difficult to produce an electric current in these materials. Some of the best electrical insulators are mica, porcelain, glass, rubber, silk, air, slate, paper, and certain synthetic materials, including plastics, silicone, and neoprene.

There is no sharp dividing line between conductors and insulators. Impure water is a conductor, but chemically pure water is an insulator. In fact, the ability of water to resist the flow of electricity is used as a measure of high purity. Many nonmetallic crystalline materials are good insulators. Examples include diamonds and quartz.

Cotton, wood, and paper are good insulators, but only if they are dry. Any water in the material coats the fibers and conducts electricity. These fibrous materials must be saturated with mineral oil, tar, pitch, or some other moisture repellent in order to be used as insulators.

According to the kinetic theory of matter particles that make up a material are never complete at rest. The atoms, molecules, and free-electron constantly in a random manner. If you connect the ends of copper wire to the terminals of a battery, the random motion of the electrons changes to a motion directed toward the positive terminal.

Electrons at one end of a conductor respond very quickly to changes at the other end. But the electrons do not move through the conductor at high speed. In fact, each electron moves quite slowly. But as soon as the first electron moves toward the positive terminal, it displaces the next one, causing it to move forward. This electron in turn forces the next one to move, and so on.

These changes occur very rapidly. As a result, the last electrons at the far end of the wire are forced to move almost instantly when the first ones move.

This action is similar to the flow of water through a pipe. Water is not compressible, so water starts flowing from one end of a pipe as soon as you start forcing water into the opposite end (provided the pipe is already filled with water when you start).

Another simple way to picture electric current is to compare the conducting path to a freight train. The cars of the train are like the free electrons in the conductor, and the locomotive is like the battery.

When the locomotive starts the train moving it pulls suddenly against the first car. This slight motion takes the slack out of the couplers, car after car, down the line. Each car moves only a short distance, but the shock runs down the entire line of cars at a very high speed. You can hear the shock better than you can see it.

An electric current is like that shock wave. Each electron in the conductor moves only a short distance. But the effect at one end of the conductor produces an effect at the other end very quickly.

Today, everyone knows that an electric current is the flow of negatively charged electrons. The electrons flow from the negative terminal of a battery to the positive terminal. That is, the current flows from negative to positive.

Only a hundred years ago, no one knew what electricity was. Scientists thought something was flowing between the terminals of a battery. But they did not know what the “something” was. They did not know about electrons or that the moving material carried a negative charge.

The early scientists labeled the terminals of a battery “+” and “-“. Then they guessed, incorrectly that something was flowing out of the positive terminal and into the negative terminal. That is, they assumed the current flowed from positive to negative, See picture below.

An electric current is defined as the amount of electrical charge moving past a given point in a unit of time. The amount of charge is measured in coulombs, and the time is measured in seconds. The rate of flow of 1 coulomb per second called 1 ampere (abbreviated A).

The rate that electrons move through a conductor is beyond the ability of the human mind to imagine it, even if the current is only 1 ampere (A). For example, suppose a conductor carries a current of 1 ampere (A). The number of electrons that pass a given point in this conductor in just one billionth of a second is greater than the total number of people living on the earth today. 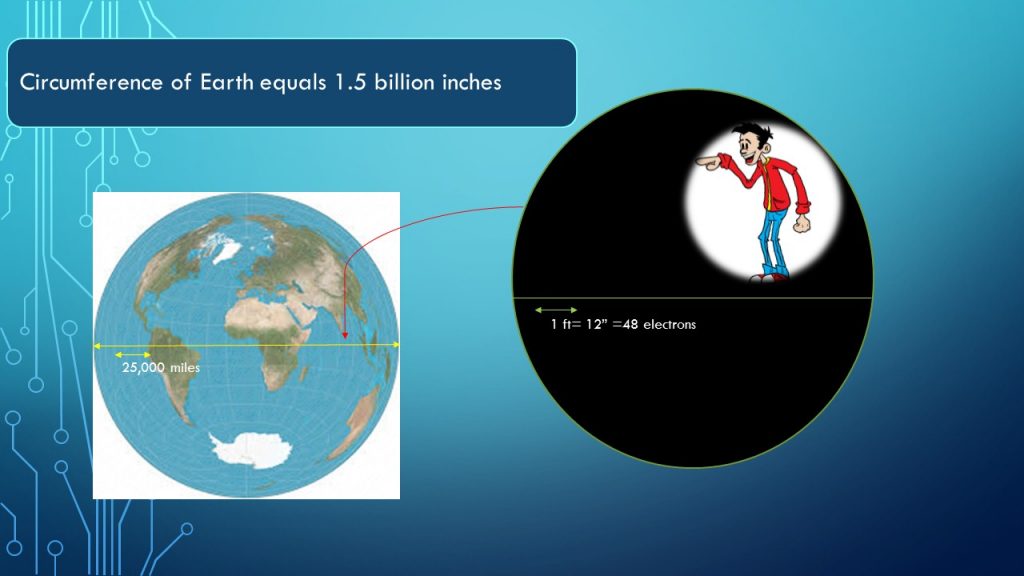 Looking at this current another way, suppose you divide the distance around the earth-about 25,000 miles-into 1-inch parts, as you see in the image above. A current of 1 ampere (A), lasting for only one billionth of a second, would consist of four electrons for every inch in the earth’s circumference.