What will happen if you connect a dc motor to an ac source? When the ac source changes polarity, the current in the motor will reverse. But the reversal will occur in both the armature winding and the field winding. Therefore, the torque on the armature will remain in the same direction. However, there are certain problems in running the DC motor on AC power. One problem is the effect of induction in the windings.

Induction is not very important in the DC motor, because the current remains constant after the motor starts. But the ac power supply operates at a frequency of 50 or 60 Hz. That is the potential difference across the motor and therefore the current in the windings changes at a rate of 50 or 60 cycles per second. Each cycle consists of two changes in direction, from positive to negative and back again.

The field winding of a DC shunt motor has many turns of fine wire. A large number of turns is required so that the motor can develop a strong enough magnetic field to produce the required torque on the armature.

If ac power is applied to the field winding, the inductive reactance causes high impedance. This impedance in an ac circuit has the same effect as high resistance. The result is a low current in the winding producing a weak magnetic field and low torque on the armature. As a result, the motor will not run efficiently. 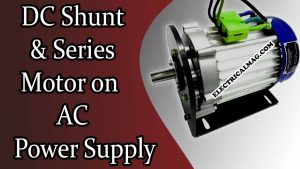 DC shunt motor does not operate on AC power

The field winding of a dc series motor has fewer turns and larger wire than the field winding of the dc shunt motor. Therefore, its inductive reactance is less. The strength of the magnetic field is about the same as when the motor runs on dc power.

However, a dc series motor does not operate well on ac power. The motor has a low-efficiency power factor and runs with considerable sparking a low the brushes. The low efficiency is caused by high hysteresis loss and high eddy current loss. The power factor is caused by the inductive reactance of the field and armature windings.

Read more about Motor work on both AC & DC

The amount of power lost equals the product of the current squared and the resistance of the iron (P=I2x R). The current varies in direct proportion to the speed and the magnetic field strength. Therefore, the power loss varies with the square of the motor speed and with the magnetic field strength. To overcome these disadvantages, an ac series motor frame is made from laminated iron.

These measures reduce the eddy current losses and the inductive reactance. In addition, the armature winding is made with more conductors to obtain the required torque with lower magnetic field strength.

Induction in the coil undergoing commutation causes brush sparking in a dc motor. As this coil is short-circuited by the brushes, a potential difference is induced in the coil.

This induction is minimized by winding the coils with fewer turns. More coils having fewer turns are required on an ac armature to produce sufficient torque.

More commutator segments are therefore required, which is another characteristic of the ac series motor.